They say, “many hands make light work.” That’s one of the reasons why the Town’s volunteer program is so important. Now, one of the Town’s most passionate volunteers is being honored with a Bench Dedication at Rock Park and the Cornerstone Tribute award.

Dennis Carnahan has been a volunteer with the Town for more than 16 years and is a founding member of the Keepers of the Rock volunteer group. Since 2004, Dennis has consistently dedicated his Saturdays between April and October to the trails and natural resources at Rock Park. To thank him for his contribution to the community the Town dedicated a bench in his honor at the park. Additionally, Town Council awarded Carnahan with the Cornerstone Tribute award.

Keepers of the Rock is an all-volunteer group that adopted the Town’s namesake, Rock Park, in hopes of making significant improvements to the area. The group conducts monthly restoration days at the park in coordination with Castle Rock Teen Court. Carnahan leads first-time juvenile offenders who are completing community service as part of the Teen Court program. His contribution to their positive skill development helps decrease recidivism (the likelihood of committing another offense) in these youth.

“After every work outing, Dennis shakes hands with each volunteer and thanks them for coming,” said Court Administrator Karla McCrimmon. “These kids are generally not there by choice, but Dennis treats them with respect and is able to create a connection. He teaches them about giving back to the community and why that is important. That really speaks to Dennis’ character and his passion for Castle Rock.”

Carnahan’s volunteer work at Rock Park has consisted of maintaining 1.4 miles of trail and 62 acres of open space. He has also lead several maintenance and construction projects including new trail construction, installation of wooden steps and fencing, revegetation of social trails and restoration of wildlife habitat.

The bench in Carnahan’s name is located along the trail loop surrounding the Rock. The Cornerstone Tribute sign will be installed at the park this spring.

Town Council created the Cornerstone Tribute award in 2007, to recognize individuals and organizations who help the Town reach the four cornerstones of its vision: Town identity, community planning, community service and local economy. Carnahan was presented the award for his commitment to improving the physical quality of the trails, protecting the natural resources and preserving the landscape of Rock Park. 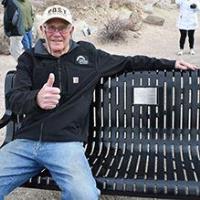