Preliminary results for today’s election indicate two of the Town’s ballot questions have passed, while two have failed. Here’s a look at the results as of 11:15 p.m. Nov. 2:

2D: Use of all excess revenues solely for police, fire and roads

Close to 19,000 Castle Rock ballots had been counted to get to the above totals, and about 5,000 ballots are remaining to count. Additionally, there are provisional ballots – including some for which voters need to verify their signatures – and absentee ballots from those serving in the military overseas that are yet to be counted.

Results of the election will become official later this month. Meanwhile, Town staff and Town Council will be working to implement the voters’ decisions, including revisiting staffing plans for the Town’s police and fire services over the next five years. After months of evaluating the Town’s service needs, long-range financial projections and alternative revenue options – and collecting public feedback on the same – Town Council had encouraged voters to say “yes” to all four ballot questions.

The two questions that appear unsuccessful are a $7-per-square-foot tax on new house and apartment construction, which would have generated the funds needed to add 75 fire and police positions over the next five years. The other was a 0.1% sales tax increase, which would have generated about $270,000 annually for open space and trail maintenance needs, plus allowed for the accumulation of more than $8 million by 2026 for additional open space acquisitions.

With two questions approved, a 10-year “TABOR timeout” is expected to bolster funding for fire and police in years with strong revenue and will allow the Town to receive grant funds for the needed interchange at Interstate 25 and Crystal Valley Parkway. A 6% lodging tax will help the Town update parks, improve public vegetation and entryways into Town, and more starting next year. Learn more about how the Town is putting to use the additional resources approved at CRgov.com/OurFuture. 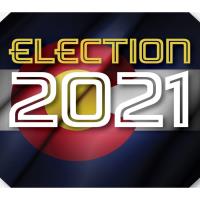